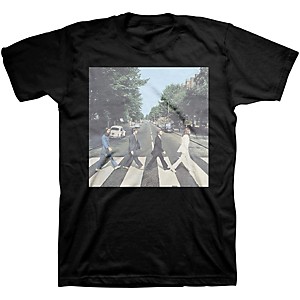 The front of this 100% pre-shrunk cotton shirt displays a big screen print of the cover to the Beatles Abbey Road album. The front cover design, a photograph of the group on a zebra crossing, was based on ideas sketched by McCartney, taken on August 8, 1969 outside EMI Studios on Abbey Road by photographer Iain Macmillan. In the scene, the group walked across the street in single file from left to right, with Lennon leading, followed by Starr, McCartney, and Harrison. It is the only original UK Beatles album sleeve to show neither the artist name nor the album title on its front cover.Abbey Road is the eleventh studio album by the English rock band the Beatles. The recording sessions for the album were the last in which all four Beatles participated.
Beatles J10509.001.002 – Beatles Beatles Abbey Road Mens T-Shirt Black XX-Large – musical instruments